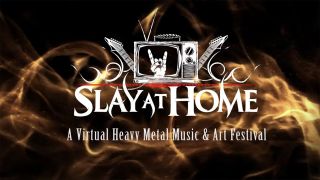 A new free metal and arts festival will be broadcast online this weekend featuring dozens of artists from across the rock world to raise cash for MusiCares and Global Giving.

Slay At Home has been put together by Metal Injection’s Frank Godla and will be broadcast tomorrow and Saturday (May 29 & 30) at 8pm BST.

Artists including Trivium’s Matt Heafy, Tesseract, Employed To Serve and Suicide Silence will give exclusive performances, while there will also be a number of cover collaborations featuring Megadeth’s Dirk Verbeuren, The Black Dahlia Murder’s Trevor Strnad and GWAR’s Pustulus Maximus.

And as if that wasn’t enough, the festival will also feature art installations by Gojira’s Mario Duplantier and more.

Godla tells Metal Injection: “By keeping the set times between five and 15 minutes for each artist, it allows me to not only keep things moving, but mix it up in ways that conventional festivals simply can’t. Every single hour will contain big names and emerging artists right next to each other.

"I’m trying to look at the bright side of our current situation, and not only make this an entertaining way to see the artists you love flex their creativity in new ways, but hope this event acts as a place of discovery for every viewer out there.”

Both days will be broadcast on YouTube. Bookmark Day 1 and Day 2 and check out a trailer below.