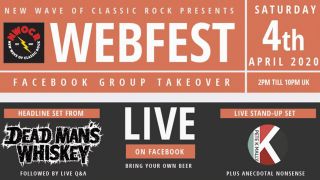 The New Wave Of Classic Rock Facebook group have come up with a great way of promoting and supporting bands during the coronavirus lockdown.

They’ve announced Webfest, a fully-streamed online festival, which will take place on April 4 between 2pm and 10pm GMT. Organisers have so far secured 24 artists including headliners Dead Man's Whiskey, and have also drafted in comedian Pete K Mally for a live set.

Webfest are asking fans to support the event by buying a virtual cup of coffee. The money raised will be split evenly among the bands appearing.

Organisers say: “The New Wave Of Classic Rock Facebook group will be open to all comers on Saturday, April 4, as we present Webfest – a fully live-streamed event where you can bring your own beer and create your own watch parties.”

Music fans can donate to the Webfest artists right now.

Some of the other artists set to appear include Matt Long And The Revenant Ones, Fallen Mafia, The Darker My Horizon, the Jack J Hutchinson Band, Trouble Country and Circus 66.