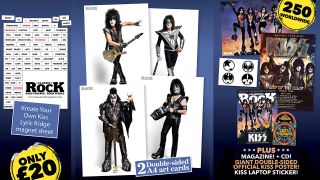 To celebrate KISS's End Of The World Tour, Classic Rock is proud to publish this world exclusive magazine bundle, limited to only 250 copies worldwide.

The bundle includes two double-sided A4 high quality art prints, a set of fridge magnets which which to create your own KISS-themed messages, a giant double-sided poster (featuring Kiss's classic Destroyer artwork on one side and the official poster for the UK leg of the band's End Of The World tour on the other), and a laptop sticker.

This all comes bundled with the current issue of Classic Rock magazine, in which we get exclusive, behind-the-scenes access to KISS on their farewell tour.

Once these are gone, they'll be gone forever, so order yours now at http://tinyurl.com/kissbundle

Mark Knopfler
He’s one of the world’s most successful musicians, but most people wouldn’t recognise the Dire Straits founder in the street or on the London Underground. And he likes it that way.

Eric Gales & Dave Navarro
Classic Rock sits down with the two guitarists and meets “two junkies of the worst kind”.

Joyous Wolf
Looking for a Next Big Thing to get behind before everyone else does? Meet the band that are all-guns-blazing proof that proper shit-kicking rock’n’roll lives on.

Lee Kerslake
Knowing that he is living on borrowed time, the former Ozzy and Uriah Heep drummer looks back at a life filled with of highs and lows, friendships, fallouts and reconciliations.

Tedeschi Trucks Band
They’re led by arguably the best slide guitarist of his generation and a singer who oozes sweet soul, and their ‘old-fashioned’ values are a vital element of their success.

Yngwie Malmsteen
The Swedish speed demon has enthralled and infuriated in equal measure since the 80s. Now he’s made… a blues album.