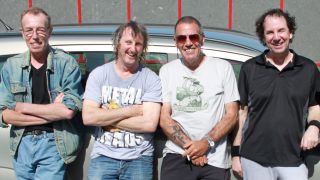 Boogie-rockers Spider return from a three-decade absence later this year, with bassist/vocalist Brian Burrows revealing that brotherly love was partly behind the decision to reunite the group for one final show.

“From a personal point of view, I didn’t really want it to happen,” he admits. “My preference was to leave folks with their memories of four young men with energy and passion for rock music.”

However, last summer the band – completed by rhythm guitarist/frontman Colin Harkness, guitarist Sniffa and drummer Rob E Burrows – appeared at a fan club meet and greet event and ended up playing a short unplugged set. Things went so well that they got together again to rehearse in private.

“Something just clicked,” Burrows says. “It was fun, it was good. We all appeared to enjoy each other’s company, too – so I gave in to my brother Rob’s nagging.”

Spider’s one-off show takes place at the Santa Pod Racetrack in Bedfordshire on Saturday October 8. It will feature their original line-up (Sniffa having quit at the tail end of the original run).

“We’ll play our best known songs and a few from the really early days – some tunes most folk won’t have heard us play before,” Burrows reveals. “Expect some anecdotes as well. We’ll go for it as best we can, but we’re not in our twenties anymore and there’s 30 years of rust to shake off.”

Originally from Merseyside, the four-piece played approximately two thousand concerts up and down the UK and across mainland Europe during a ten-year period, before bowing out at London’s Marquee Club in July 1986. Brian Burrows now resides in France, his brother Robbie having emigrated to Australia.

Their three-album catalogue was repackaged as The Complete Anthology by Cherry Red in 2012, following the release of The Singles Collection a year earlier. However, Burrows insists that despite this renewed activity, there will be no further opportunity to see the band play live again.

“It really is a one-off,” he stresses. “Geography makes things really difficult, but all of us have lives to be getting on with – the organising of just one gig has taken lots of time and we’re not even into rehearsals yet. But everybody agreed to this last night of fun. Sorry, but that’s how it has to be. So we’ll do our level best, and hopefully some of the old magic will return.”

Tickets are priced at £15, which includes admission to the Santa Pod GTI Festival the following day plus camping for those wishing to stay overnight. They’re available now by making a PayPal payment of £15 per ticket to nasevents@orange.fr. Purchasers must include their full name and address including, postcode.