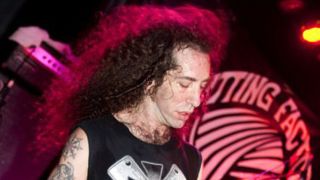 Nuclear Assault’s Dan Lilker has announced the band are planning to make their seventh and last album before staging a "final assault" tour.

The former Anthrax man, who’s also a member of Brutal Truth, has decided to wind things down so he can concentrate on other aspects of his career – but he wants to mark the band’s 30th anniversary in style before they go.

Lilker says: “Brutal Truth will be a done deal by the end of the year, and with that will come a slower phase in my musical career. I’m scaling back so I can have a little more stability in my life.

“In 2015 it will be 30 years since Nuclear Assault solidified our lineup and started making a name for ourselves. To commemorate this, the band will write and record another album and play some shows for a ‘final assault.’

“The live front will be of a limited nature due to people in the band having careers they can’t just walk away from. We will try to do whatever we can, especially in the summer, to get out there and thrash for everyone again.

“We want to make sure this album is really killer so we can go out with a big bang.”

Lilker formed the band after leaving Anthrax in 1984, which he co-founded with Scott Ian. He’ also involved with Nokturnal Hellstorm, Blurring and Venomous Concept. Nuclear Assault’s last album was 2005’s Third World Genocide.