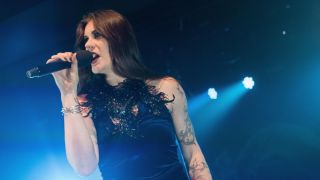 Nightwish singer Floor Jansen has responded to the “fury” generated by her recent comments that “Slayer are a dreadful band.”

And after Slayer fans reacted angrily to her comments, Jansen wrote on Instagram: “Apparently I unleashed the fury upon metal earth when I was asked a question about the most metal album I own.

“Thinking Slayer’s music is not my thing doesn’t mean I don’t respect the band for what they are and what they’ve done. I just won’t play it. As I can imagine they won’t listen to mine either for that matter.”

Jansen also claims that TeamRock’s news story took her comments “out of context.”

She adds: “The reaction this triggered online saddens me. We are all entitled to our own opinion.

“But this sentence about my metal albums was put out of context, blown up and used for pathetic ‘shock purposes’.

“Does that mean I need to keep my mouth shut next time, no. Does it mean I need to be offended by so many whom I didn’t offend? No…I don’t like Slayer. Shall we get over that now?”

TeamRock News Editor Stef Lach, who wrote the news story based on The Metal Test feature, responds: “Floor was asked simply to name the most metal album she owns, and of her own accord gave an amusing reply.

“We made it clear in the news story that the quote was from a ‘light-hearted’ feature and we stand by both the original feature and the subsequent news story.

“We don’t accept that Floor’s comments were taken ‘out of context’.”

Read Jansen’s Metal Test responses in full in issue 291 of Metal Hammer magazine, which is out now in print and via TeamRock+.