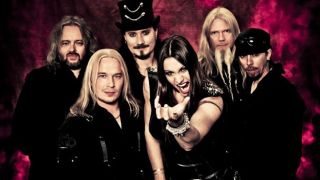 Nightwish have recorded 12 demo tracks in the run-up to recording what will be their eighth album.

It will be their first to be led by the vocals of Floor Jansen, who was announced as permanent replacement for Anette Olzon in 2013. It will also feature the band’s other new full-time member, multi-instrumentalist Troy Donockley.

Mainman Tuomas Holopainen says: “It has come together beautifully and we now have a total of 12 songs to work with. We are all very eager to finally get together and start the rehearsals in July. If everything goes as scheduled, we should have the ready album in our hands by the end of January 2015.

“It’s still too early to analyse the material more closely, but the album will once again explore all the ends of the spectrum, bringing the very best out of the newcomers Floor and Troy. And, stealthily, the album ended up having a theme running through it.”

The demos were recorded with Nightwish producer Tero Kinnunen in Hattula, Finland. Their last album was 2011’s Imaginaerum.