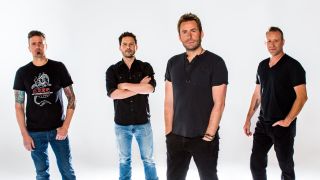 Nickelback’s Ryan Peake has checked in to let fans know that a new documentary about the band is “close to being released.”

The guitarist posted the news via video on Nickelback’s social media channels, where he also thanked fans for taking part in their #NickelbackRiffChallenge. Peake also reported that drummer Daniel Adair didn’t feature in the last session as he’s injured his arm, but is now on the mend.

Peake says: “We teased a documentary on our tour a year and a half ago. And without boring you with all the details, it is very close to being released. So please stay tuned.

“I would say in the next month or two, we may have something for everybody that wants to see everything about Nickelback.

“Even if you don't want to see anything about Nickelback, we’ll have it all for you. So, stay tuned. We hope you guys enjoy it and we’ll try to keep you updated. In the meantime, stay safe.”

The riff challenge invites fans to play and sing along to their favourite Nickelback tracks and upload them online. The band have been sharing video clips on Twitter.

Speaking with Consequence Of Sound, Townsend praised Kroeger for his involvement, saying it was a “godsend” for him to work with the singer as it allowed him “to make decisions on Empath that I don’t know if I would have made had I not made his acquaintance.”