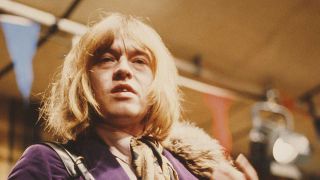 Jones died 50 years ago this month, when his body was found in the swimming pool of his home at Cotchford Farm in Sussex, a mere two months after being fired from the band.

Jones's death was originally recorded as "misadventure", but a new Netflix documentary based on Terry Rawlings' 1994 book Who Killed Christopher Robin? has unearthed new evidence.

The documentary features an interview with Jones' manager Tom Keylock, who claims that Jones was incapacitated on the night in question.

"What people don’t know is that very strong hash cakes were made," says Keylock. "That’s why they were all stoned and they didn’t know what day it was.”

According to official reports, there were only three guests at Cotchford that night: Brian’s builder Frank Thorogood (who died of cancer in 1993), Jones' girlfriend Anna Wohlin, and Janet Lawson, who was Keylock’s girlfriend. But now Keylock admits to being there too.

“Course I was at Cotchford Farm," he says in the documentary. "Where else did you think I was then? I was there and that’s why I know the truth."

The first edition of Rawlings’ book claimed the primary suspect was Thorogood, and that there had been a police cover up. The allegation is repeated in the documentary, along with claims that a local coroner was bribed to hurry the autopsy.

“I think he was murdered and I think the police did not investigate it the way they should have," said Marion. "I would love to have them reopen [the case] and to get some answers.”

In a statement released in May 2019, the police said: “The death of Brian Jones was investigated in 1969 and was also the subject of two reviews by Sussex Police, in 1984 and 1994.

“From time to time over the past 49 years Sussex Police have also received messages or reports from journalists and other individuals about the death. Each is considered on its individual merits and reviewed wherever appropriate.

“No such report has been received since 2010 and no new evidence has emerged to suggest that the coroner’s original verdict of ‘death by misadventure’ was incorrect. The case has not been reopened and there are no plans for that to happen."

A transmission date for the documentary has not yet been set.