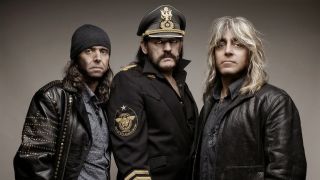 Motorhead have issued clips from the studio as they continue work on their 22nd studio album.

Fresh from a series of November UK shows – including a stop at Wembley Arena – the band entered a Los Angeles studio with longtime producer Cameron Webb in January to begin work on the follow-up to 2013’s Aftershock.

Motorhead have been keeping fans in the loop on the project’s progress by sharing photos and video from the sessions via their social media sites.

The band say: “Phil Campbell is working on guitars today in the studio for our new album! Here’s a little taste!”

And along with a photo of mainman Lemmy, they add: “Lemmy’s working on bass and vocals today for our new album!”