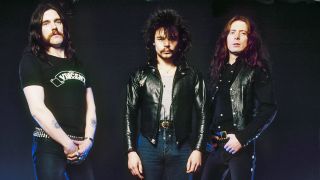 Fast Eddie Clarke has revealed he came close to a reunion with Motorhead in the 1990s – but Lemmy blocked it because he didn’t want to upset the current members of the band.

Guitarist Clarke was part of Motorhead’s classic trio, along with drummer Philthy ‘Animal’ Taylor, before being fired in 1982 after six years in the lineup.

And he says he was preparing to take the stage with Lemmy in London when the mainman died in December last year – just weeks after Taylor.

Asked about a reunion, Clarke tells EonMusic: “I talked about it in the late 90s with Lemmy. I had a serious conversation with him and it was looking pretty good.

“Not to upset the present band, we were going to come up with maybe an acoustic thing, but do it in a really different way – get a female orchestra in suspenders and stockings.

“I’d have loved to have gotten back together. But Lemmy couldn’t face down his band, really. He felt too guilty.”

Clarke says he understood: “Even though there was talk of a compensation package for them for a year off, I don’t think he had the stomach for it. He’d been with Phil Campbell since 1984. It was a long time and you’ve got a bit of loyalty.”

The guitarist admits he and Taylor nearly came to blows when they trio met up in 2002, but relationships had improved in recent years.

“I’d been seeing Phil a lot and he was slowly going, and he went,” says Clarke. “The night he went I was at the Classic Rock Awards and Lemmy was there, and he was in a fucking bad way. I really was quite shocked.

“I was supposed to do Hammersmith with them, get up and do two or three numbers at the end. I had a chat to him about that. He did seem very frail and I did think, ‘I wonder if he’s going to make it.’

“I didn’t think he was going to fucking die, though. I thought he might just be able to stop touring. Then I got the call – there was two months to live, and he died that night.”

Asked about being the last man standing from the Motorhead trio, he reflects: “It’s not an enviable place to be, but it is how it is. I did stop partying as heavy as they did. He was strong as an ox, old Lem, but I stopped drinking many years ago so I had the advantage.”

Clarke just completed a UK tour with his band Fastway – but he admits his emphysema means he’s not fit enough to do it for long. “I thought I’d ride it one more time,” he says. “Because of Phil and Lemmy.

“I’ve had all this outpouring on my Facebook page. I really felt for the fans. It really upset so many over them. It meant a lot to people and I didn’t fully understand that. I thought, ‘I’ll do it for them.’”

And he wants Lemmy’s outfit to be remembered for their fans. “Back in the 70s, the business didn’t want to have Motorhead anywhere near it,” he says.

“But it was the fact that the fans would not go away that kept us going. And as the fanbase grew, the business had to say, ‘We should put a record out of these guys.’”