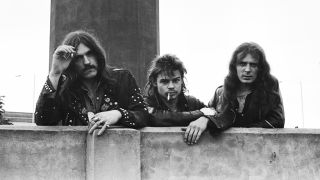 When you started the band, people hated you. Did you always know you were right and the doubters wrong?

Lemmy: Not at all. The first line-up was crap. We had a drummer [Lucas Fox] who’d never played in a band before, and [guitarist] Larry Wallis was always grandstanding. That made things very difficult. When we got Phil Taylor, that was a big turn for the better.

Did the essence of Motörhead just appear out of the ether or did you have to work at it?

The secret was playing gigs. Like bands did back then, you got yourselves in front of people and played shows. When we started to do that we were away.

Was there a particular moment when you knew it would work out?

That was when Eddie Clarke joined, in 1976. He was a great guitarist until he became impossible to deal with.

Eddie Clarke recently said: “What the three of us did together in Motörhead was so incredible. It’s a shame we can’t be together in our old age to have a fucking laugh about the good and bad times.” Do you ever still think of those days?

Not often, but whenever I do they are very dear to me. We were all together like a three-headed monster, and we kicked the asses of all those who said we were the worst band in the world. And we’re still fucking them forty years later.

Was bringing in Brian Robertson as Eddie’s replacement a mistake?

Yeah. But I thought that he’d carry on looking like he’d done in Thin Lizzy. Instead he dressed like a cunt. Who needs Vagina Man in their band?

What other slip-ups did you make?

Pete Gill, our drummer in the eighties, was great at the start, but then he tried to get me fired. From Motörhead! Can you imagine that? The only reason I started Motörhead was because I’d been fired from every other band I was in.

Were Motörhead saved by your move to America in the nineties?

Oh, without a doubt. We’d never have won our Grammy. I was broke. And then I wrote those four songs for Ozzy on No More Tears, and they made me more money than I’d ever earned in rock’n’roll until that point. And once we’d moved away we became flavour of the month because we were an exotic foreign band.

Do you give a damn about the Rock And Roll Hall Of Fame?

I fucking hate them. I lent them a pair of boots, a guitar and my original Ace Of Spades tour jacket, and they lost the jacket, which was very dear to me. The Rock And Roll Hall Of Fame is not very rock’n’roll. It holds no value, though I wouldn’t mind being in it – if only to push sales up a bit, you know?

Were Motörhead a genuinely groundbreaking band, or were you in the right place at the right time?

A bit of both. Every band is in the right place at the right time. Had Brian Epstein not gone to the Cavern and fallen in love with John Lennon, would The Beatles have happened? Who knows? What set us apart from the rest is that we never compromised. We’re do or die – you like us or you fuck off.

Five years ago, you said: “If the other two wanted to carry on when I’m gone, I wouldn’t have a problem with that.”

It’s true. But they’d never find anyone that could sing or play bass like me. It’s not easy to sing like this, man. You wouldn’t believe the money I’ve spent on cigarettes and Jack Daniel’s.

Honest. We’re an honest band, and I’m an honest and decent man.