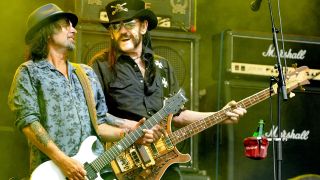 Former Motorhead guitarist Phil Campbell has revealed he came close to retirement after the death of mainman Lemmy.

But the Welshman says his experience of forming a band with his sons has changed his mind.

And he admits it took him months to get over the shock of Lemmy’s passing in December, even though the bandleader had clearly been ill for months.

Campbell tells WalesOnline: “I knew Lem wasn’t well. I knew the day would come at some point, but it happened so quickly.

“He was playing better in the winter, a few weeks before he passed away, than he was in the summer. I think I started to romanticise, thinking, was he really indestructible?

“When he got up on stage he rocked like an 18-year-old. Even though it must have been paining him inside, he still did it. It was unbelievable.”

He continues: “I had the call saying Lem was not very well at all, and telling us to fly over. But our manager called a day later saying he’d gone peacefully in his sleep. It was all pretty sudden.”

The guitarist describes the global outpouring of grief as “something else” and adds: “The first three months, personally, I was in shock. I knew Motorhead had great support all these years, but the extent just blew my mind.

“After the first three months I cried more. That was when Lem’s death started to sink in and I really began to miss him. Reality kicked in and it was hard to take.

“It wasn’t all about playing on stage with him – I miss not being able to call him up. He was such a knowledgable and funny guy. I spent more time with him than I did my wife and family.”

But Campbell didn’t discuss health issues with Lemmy. “We just talked about the next gig, next song, next album. Lem wanted to carry on and wanted to play.

“He didn’t want to sit around the house waiting to die. He wanted to go out on a high.”

One of his fondest memories took place on tour a few years ago. “He called me in my hotel room and said, ‘Phil, come down to my room now.’ I thought, ‘What have I done wrong now?’

“I was expecting him to say, ‘I listened back to last night’s tape and you played like shit.’ But he said, ‘I just wanted you to know, never once in all this time have I regretted having you in the band. You’re a good man, Phil.’

“I’ve been blessed for the life I had with him. I wouldn’t have missed it for the world.”

Over the summer he converted his All Starr Band into Phil Campbell And The Bastard Sons, consisting of sons Tyla, Dane and Todd, plus vocalist Neil Starr.

“I was planning on semi-retiring after Motorhead finished – but I can’t see that happening now,” he reports. “We’re going to have some fun with this. Getting back on stage has been good for me.”