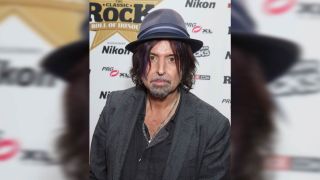 Motorhead guitarist Phil Campbell says he wasn’t at Lemmy’s funeral as he was advised by doctors not to fly.

Campbell was a notable absentee from frontman Ian ‘Lemmy’ Kilmister’s Hollywood funeral at the weekend and he explains in a series of tweets that he was under doctor’s orders not to make the trip from the UK.

Campbell says: “Amazing service for Lem the other day, everyone there spoke beautifully. I really wanted to attend but I wasn’t able to make it. Unfortunately I was advised on doctors orders not to fly on such a long haul flight due to my recent hospitalisation.

“I’m doing well though and I managed to watch the whole service via the online stream, so thanks to the Motorhead team for organising that.”

Motorhead had to re-schedule three European shows late last year after Campbell was taken to hospital with an undisclosed health problem. Lemmy died of an aggressive form of cancer on December 28, just a few days after being diagnosed and turning 70.

Meanwhile, former Motorhead guitarist ‘Fast’ Eddie Clarke has also explained his absence from the funeral, saying he couldn’t get a visa to enter the US.

He says: “I have past sins, which means it takes longer for me to get a visa and with being Christmas, there wasn’t enough time.

“I watched it online last night. I thought everyone did very well. It all reminded me of what a great man Lemmy was and how much he lived for his music and Motorhead and the fans.

“I hope you all enjoyed it as much as I did. It was very sad but the message got across about the great man.”