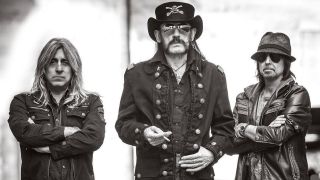 Motorhead have been forced to cancel tonight’s show in Hamburg due to guitarist Phil Campbell’s health issues.

He was admitted to hospital on Friday morning leaving Lemmy and co with no other option but to pull the plug on their gig at Berlin’s Max Schmeling Halle on Friday night.

Now their planned performance at Hamburg’s Sporthalle, which was due to take place tonight (November 28) is off, with the band announcing it’ll now take place next month.

They say on Twitter: “Hamburg show is off today, rescheduled to December 9 at Sporthalle. See you all there. Thank you for all the well wishes for Phil.”

No details on Campbell’s condition have been made public. Their next scheduled gig is on November 30 in Denmark.