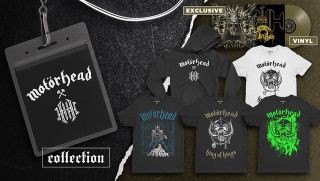 A selection of nine t-shirt designs have been released alongside two hoodies and a gold vinyl pressing titled Evolution Of The Game, which features Triple H’s walkout track The Game.

A statement about the collaboration reads: “To commemorate one of the most bad-ass entrances in WWE history, WWE and Global Merchandising Services are excited to announce a partnership to celebrate the 25th anniversary of Triple H’s debut with the WWE by developing a range of co-branded merchandise with the legendary British rockers, Motorhead.

“When speaking at Lemmy’s memorial service, Triple H said that Motorhead gave him the greatest gift of all time… their sound.

“Throughout his remarkable 25-year tenure in WWE, The King of Kings has won 14 world championships, engaged in countless five-star classics and led unforgettable groups such as D-Generation X, Evolution and The Authority to enormous success.

“And he accomplished most of that while entering the squared circle to the head-banging sounds of Motorhead, including timeless tunes such as The Game, King Of Kings and Line In The Sand.

“Motorhead even made two live appearances and played Triple H to the ring at WrestleMania 17 and 21.

“The collection consists of specially designed products that celebrates the relationship and friendship between Triple H and the band, especially their iconic frontman, Lemmy Kilmister who joins him in a cartoon incarnation as an honorary member of D-Generation X.”

Check out the full range of merch on the WWE online store and see  some of our favourite items below.

Meanwhile, Motorhead’s 1980 album Ace Of Spades will be reissued to mark its 40th anniversary on October 30 on various formats including 2CD and 3LP, while a deluxe version will contain a wealth of bonus material – including 42 previously unreleased tracks.

Motorhead: Evolution Of The Game
This limited edition gold vinyl pressing features a total of 11 tracks including fan favourites The Game, Cerebral Assassin, King Of Kings and Line In The Sand.View Deal

Motorhead x Triple H "DX Lemmy" Black T-Shirt
This t-shirt is just one of nine new designs on the WWE store, but this catches the eye thanks to a cartoon Lemmy who is made an honorary member of D-Generation X.View Deal

Motorhead x Triple H Black Full-Zip Hoodie Sweatshirt
Presented in black and white, the Motorhead and HHH logos are presented on the left-hand side of the hoodie – but on the back is a huge Snaggletooth design giving it a real metal edge!
View Deal