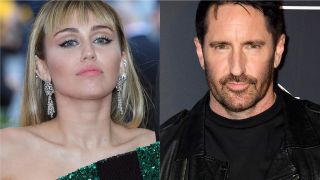 The fifth season of Black Mirror is currently being streamed on Netflix, with the third episode titled Rachel, Jack And Ashley Too featuring Miley Cyrus.

The episode centres around a lonely teenage girl who becomes obsessed with a robot doll based on her pop idol Ashley O, who is played by Cyrus. And in the hour-long show, Cyrus can be heard singing a version of Nine Inch Nails classic Head Like A Hole with some new lyrics.

Black Mirror creator Charlie Brooker reports that Trent Reznor was fully behind the project when he approached the vocalist with the idea.

He said at a press event (via iNews): “Trent got it straight away. It was via email and he was really happy pretty quickly. He wanted to see the script and I got to re-write his lyrics in a chirpy way.

“I’m not the best lyricist in the world, in the first song she’s singing: ‘I’m stoked on ambition and verve’ instead of ‘You’re gonna get what you deserve’.”

Black Mirror executive producer Annabel Jones added: “He thought it was very funny, he found the dark comedy very entertaining. There are lots of dark concepts in the film and we just enjoy that sort of childish subversion of them.”

To mark the news, Nine Inch Nails are selling a Black Mirror t-shirt featuring some of the new lyrics on their website.