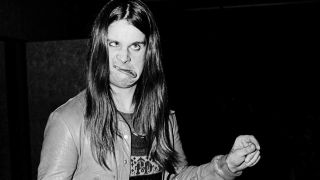 Ozzy Osbourne may be a living legend who has delivered some of metal’s finest songs, but he's also responsible for some seriously lazy and uninspired nonsense. Don’t believe us? Listen for yourselves…

This one from No More Tears starts off with some pretty malevolent guitar playing from Zakk Wylde. But just when you think things might be going somewhere Ozzy pitches in with a truly rotten vocal melody as the song descends into some endless discussion of the singer’s rock ‘n’ roll lifestyle that veers between self-aggrandising and self-pitying. Lemmy gets a co-write here, and Motörhead recorded their own version, but that doesn’t help at all.

It was weird beyond weird to hear the master of metal going all ELO on So Tired when 1983’s Bark At The Moon first appeared. The strings are quite nicely arranged, but the melody isn’t up to Jeff Lynne’s exacting standards and sounds like a poor pastiche. Just because Ozzy comes from Birmingham, there really is no excuse.

Ozzy clearly loves The Beatles, but his many attempts to recreate the Fabs’ pop psychedelic period are hit and miss affairs. This track, from Ozzmosis, falls into the latter category. The melody isn’t strong enough, the lyrics are tossed off and the song never rises above the mundane. I Just Want You from the same album pulls off the trick way, way better.

Sentimental and frankly unbelievable (in what world is Ozzy capable of being “the pillar of strength that you need”?), this is a 2007 ballad from the Black Rain album that feels like a facsimile of emotion, rather than the real thing. Musically it’s like someone’s trying to shoehorn some spooky Marilyn Manson-ness into a lighter-waving ballad. Clearly it fails.

Taken from Ozzy’s last studio album Scream, this is heavy and bursting with guitars, but you can’t help thinking it’s music that follows rather than leads. Gus G has all the tricks and flicks you’d expect of a metal guitarist, but the main riff feels tired and the idea of a 62-year-old Ozzy barking “I am warrior, I’m fearless” at us is just plain ludicrous.

On paper, the album Under Cover sounded like a recipe for disaster. Incredibly, though, Ozzy did a great job of interpreting a number of rock standards. This attempt at The Stones’ Sympathy For The Devil, however, is useless, trying to mix a funky rhythm with some eastern colourings, and in the process losing all semblance of the heavy, brooding sense of malevolence that made the original so gripping.

Here’s Ozzy’s retort from Bark At The Moon to those who called him a Satanist. In those crazy days the moral majority in the States got very hot under the collar about naughty rock lyrics, and the Double O was a prime target. “They say I worship the devil,” he claims. “They must be stupid or blind.” That’s as maybe, but this is ten-a-penny’ mid-80s metal with nothing to recommend it.

This abomination from 1988’s No Rest For The Wicked sounds like Kiss at their most unimaginative. Ozzy has never been afraid of playing to the lowest common denominator, but this is beyond the pale. “Nobody’s gonna tame me, so you’d better not try.” I think Sharon might have something to say about that, don’t you?

Even Ozzy admitted that The Ultimate Sin saw him doing a misjudged interpretation of “Liberace on acid.” He’s wrong, of course. It’s not even that good, as this uninspired, repetitive turgid nonsense amply illustrates. “You’ll never know why we rock.” Not listening to this we won’t.