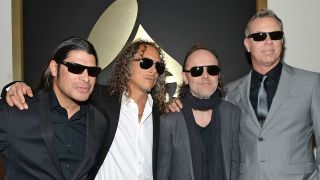 Metallica bassist Robert Trujillo says the band are “having a blast” as they write their 10th album – but he can’t define how the work sounds yet.

There’s no completion date for the follow-up to 2008’s Death Magnetic, although drummer Lars Ulrich recently said they were aiming to include some of the material in this year’s summer shows.

Trujillo tells Rolling Stone: “We’re working on these songs, we are being productive and having fun.”

Asked whether the music feels like an extension of Death Magnetic, he replies: “I can’t say that yet. I can’t relate it to any album – I think every Metallica album is unique.”

He continues: “What we’re doing is special and unique, but still heavy. For me as a listener, there’s a certain edge that needs to be there.”

Ulrich predicted last month that songwriting would be complete in a matter of weeks. Metallica return to the UK to headline the Reading and Leeds festivals in August.