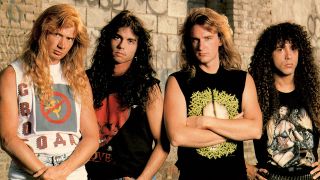 Dave Mustaine is to release an autobiography centred around the recording and release of Megadeth’s classic 1990 album Rust In Peace.

Rust In Peace: The Inside Story Of The Megadeth Masterpiece will be published by Hachette Books on October 15 and is said to be about “perseverance” and “scraping off the rust that builds over time on everything: ourselves, our relationships, pop culture, art, and music.”

A statement on the book adds: “Released in 1990, at an incredible time of flux and creativity in the rock world, Rust In Peace still stands as one the greatest metal albums ever made.

“In his new book, Mustaine reveals the process of establishing Megadeth’s lineup and hiring the band and supporting cast. He details the pains of trying to handle the ensuing success, and ultimately the pressure of fame and fortune that caused the band to finally break-up. He also takes a hard look at the music landscape of the late 80s/early 90s.

“Little did Mustaine know that the birth pangs of the record were nothing compared to the oncoming pain and torment that would surround it. Alcohol, drugs, sex, money, power, property, prestige, the lies the band was told by the industry – and the lies they told each other – were just beginning, and much like rust in real life, these factors would ultimately eat away at the band's bond until only the music survived.

Mustaine collaborated with award-winning journalist Joel Selvin on the project, while the foreward was written by Guns N’ Roses guitarist Slash who says: “Rust In Peace put the band on the map – it made Megadeth a household name.

“I certainly understand why every important Rust In Peace anniversary is celebrated as a pivotal moment for both Megadeth and for heavy metal.”

Megadeth, meanwhile, have been working on their new studio album, with bassist David Ellefson reporting earlier this month that it was sounding “insanely progressive.”

Megadeth will hook up with Lamb Of God, Trivium and In Flames next summer for their rescheduled North American tour. The run of 42 dates will get under way in Detroit on July 9 and wrap up in Las Vegas on September 10.

Rust In Peace: The Inside Story Of The Megadeth Masterpiece
Dave Mustaine will examine the recording and release on Megadeth's landmark 1990 album Rust In Peace in this new book - set to be published in October.View Deal