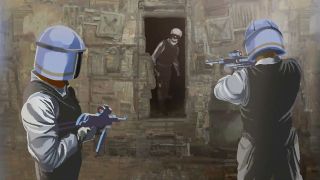 Five tracks from upcoming Megadeth album Dystopia are to be presented in a virtual reality experience, the band have revealed.

Dave Mustaine and co are to film performances of the title track, Fatal Illusion, The Threat Is Real, Poisonous Shadows and Post American World in a customised studio under director Blair Underwood, of Marvel’s Agents Of SHIELD fame.

The results will be rendered in an immersive world based on the one seen in the video for The Threat Is Real. Fans will be able to purchase a cardboard VR headset along with the album. A download code will offer access to exclusive content.

Megadeth say: “Next Galaxy Corp, a leading developer of innovative content, will create a dystopian universe surrounding the band, and allow fans to virtually enter, engage and explore.”

Dystopia is released on January 22, in various editions alongside the VR version. The band recently confirmed a North American tour, which will feature Lamb Of God drummer Chris Adler extending his guest member role.