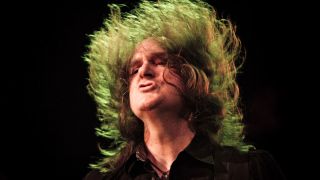 Dave Ellefson says having unexpected free time in the coming months will make Megadeth’s next album even better.

The band lost drummer Shawn Drover and guitarist Chris Broderick last year and rescheduled a string of tour dates as a result. But the setback will likely mean their new material is given more attention than usual in the studio.

The bassist tells Hot Metal Online: “We’re just returning to the studio, rehearsals are continuing before the final stages of the pre-production.

“The writing is pretty much done – that can always change in the studio. We’ll go into the recording, probably, in early May. We had some tour dates in August. Those tour dates got moved, which quite honestly is a good thing because it frees us up and gives us time to make the record with a schedule that’s a little more appropriate for how we want to make a great record.

“When the record says Megadeth on it, you’re going to get Megadeth inside of it.”

Replacements for Drover and Broderick have not yet been named, but whoever gets the jobs will have to pull their weight when it comes to songwriting, or face being cut out of the lion’s share of royalties.

“Well, if you’re not willing to show up and be part of the process, then, no, we don’t want to. Megadeth, from day one, has been about he who writes is part of that.”