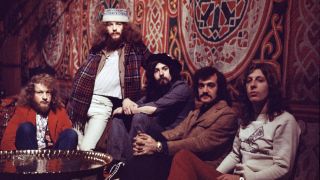 Martin Barre has recalled the moment that speaking to Jimmy Page could have led to him losing a guitar solo on classic Jethro Tull track Aqualung.

He risked bandleader Ian Anderson taking away the opportunity, and filling the space on tape with flute work instead.

The album of the same name was released 45 years ago in March. It was recorded at Island Studios in London, while Led Zeppelin were working on their fourth record next door.

Barre tells Guitar Player: “We’d locked ourselves away and I hadn’t seen Jimmy at all. Finally he walked into the control room to say hello, just as I was recording the solo to Aqualung.

“In those days, if you didn’t get a guitar solo in one or two takes, it might become a flute solo. It was, ‘Go in there and do it or else.’

Barre said last year that, although the end of Jethro Tull in 2011 came as a “big personal shock” to him, he’d never turn away from the band’s work. He released sixth solo album, Back To Steel, in September.