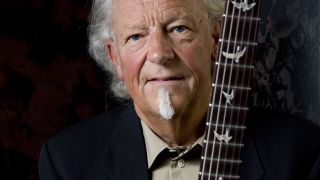 He’s on tour in the US at the moment supporting his latest album Back To Steel. And while he says the material he recorded with Ian Anderson will always feature in his set, he ultimately wants his solo material to take centre stage.

Barre tells Paste: “Jethro Tull’s music will always be a part of my work – but I hope it becomes about 40% instead of 60%.

“I will never turn my back on it, though. I’m not so stupid that I don’t know that people come to hear me play so they can hear Tull. But a lot of that music is in me anyway. That’s not far from home. It will always be there.”

And while he’ll always be associated with Tull, Barre stresses the importance of his band having their own identity.

He continues: “This has been a whole turning point musically. We will always have the Tull connection – that goes back to my roots and our fan base – but I want to take the fans with me.

“Essentially our musical style isn’t really changing. Back To Steel is a more direct approach to my songwriting, and our intention is to make it more workable and accessible for an audience to enjoy.”

Last month, Barre described the moment Jethro Tull came to the end in 2011 as a “big personal shock.”