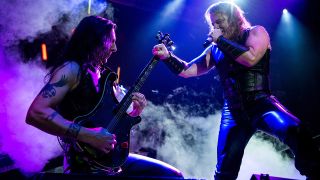 It's emerged today that Manowar have cancelled their Hellfest headline slot at the eleventh hour.

The band were due to top the bill at the French festival later today (June 21), but Hellfest organisers have revealed the US outfit will no longer take part.

A statement from the festival says: “Despite a presence on site on June 20, the teams and members of the group decided to leave the site.

“The Manowar concert, scheduled Friday, June 21, will not take place for reasons beyond our will. We are sincerely sorry for all Manowar fans and more widely for all the fans attending Hellfest.”

At the time of writing, there’s been no statement from the Manowar camp.

Some fans have reacted angrily to the news, saying they had flown across the world to see Manowar’s set.

One fan commented: “I came from South America to Hellfest this year largely because Manowar were headlining. Seeing them at Hellfest 10 years ago was one of the best shows of my life and I’ve been a fan for over 20 years. I couldn’t have been more excited and now more disappointed.”

Another added: “I flew all the way from Japan to come see Manowar. I feel highly betrayed.”

Manowar severed ties with guitarist Karl Logan after the musician was arrested in August last year and charged with third-degree sexual exploitation of a minor.

The US outfit brought in EV Martel to replace him on their Final Battle world tour.