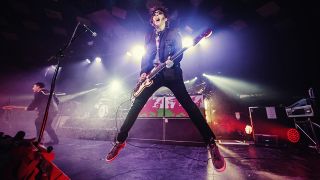 Manic Street Preachers will release their Be Pure - Be Vigilant - Behave film in cinemas across the UK later this year.

The footage was captured as the Manics toured throughout 2014 and 2015 in celebration of the 20th anniversary of their third album – 1994’s The Holy Bible.

Film-maker and Manic Street Preachers collaborator Kieran Evans followed the band around the UK leg of the tour capturing the live performances, as the band played the album in its entirety for the first time.

Now, to mark The Holy Bible’s 25th anniversary, the previously unreleased director’s cut of Be Pure - Be Vigilant - Behave will be screened in 12 cities across the UK in November and December.

Evans is set to appear at some of the dates for Q&A sessions, with further details to be revealed in due course.

The synopsis reads: “From intense reactions through to achingly fragile moments, Evans has captured every breath of those shows without compromise. It demands your constant attention and concentration as Evans thrusts you, the audience, as close to the action and experience of the shows as he can.

“It’s a testament to, and of, the band, their history, the bond they share with their fan-base, and where they are now. It’s unlike any concert film you’ll have seen or experienced before and probably ever see again.”

Tickets for the majority of dates are now on sale.