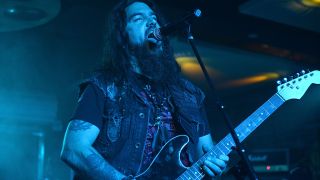 Machine Head’s Robb Flynn has checked in to tell fans that he’s back in the studio and working on new material.

The news comes after the departures of guitarist Phil Demmel and drummer Dave McClain, who quit the band following the conclusion of Machine Head’s Freaks & Zeroes North America tour in November last year.

Flynn has posted a short video on Facebook where he says: “Oh yeah! Where we at? We’re in the studio. We’ve got the guitar and laying down some tracks… some new heaviness!”

It’s not clear who’s joining him in the studio, but it’s thought that bassist Jared MacEachern will be involved after he stayed in the lineup following Demmel and McClain’s departures.

Earlier this month, Demmel told the Talk Toomy podcast that Flynn had essentially turned Machine Head into a solo project and said he wasn’t happy with the way the band’s last studio album Catharsis turned out.