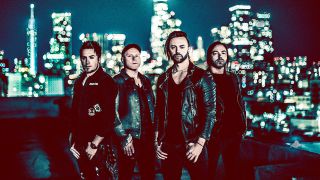 Bullet For My Valentine have released a stream of their new track Letting You Go.

The single has been taken from the band’s upcoming sixth studio album Gravity, which will launch on June 29 via Search And Destroy/Spinefarm Records.

Vocalist and guitarist Matt Tuck says: “Letting You Go was a very challenging song to write in so many ways. It's by far the most experimental track I've ever written musically and lyrically.

“I really wanted to make a track that stood out from the crowd and separated us from any other band in our genre, and that's exactly what Letting You Go does.”

The band are currently on tour across North America and will play this weekend’s Rock On The Range, with their set at the Columbus festival tomorrow (May 19) streaming live right here.

We have live coverage of the festival running today, Saturday and Sunday featuring other artists including Stone Sour, Avenged Sevenfold, Code Orange, Godsmack, Baroness and more.

Bookmark our Rock On The Range page and check in to see some of your favourite artists this weekend.