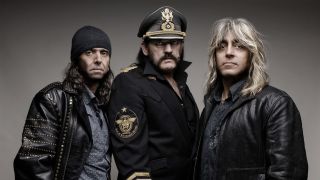 Lemmy and co’s version is previously unreleased and was recorded during the band’s 2015 studio sessions for what would turn out to be their final album, Bad Magic.

Heroes joins 10 other tracks on Under Cover – an album featuring Motorhead’s take on tracks by artists including Ozzy Osbourne, Sex Pistols, Metallica, Judas Priest and the Rolling Stones. It’ll be released on September 1 and is available for pre-order.

Campbell tells Rolling Stone: “It’s such a great Bowie song, one of his best, and I could only see great things coming out of it from us – and so it proved to be. Lemmy ended up loving our version.”

Dee added: “He was very, very proud of it – not only because it turned out so well but because it was fun! Which is what projects like this should be – fun!”

Last month, a short album trailer was released focusing on Motorhead’s take on Sex Pistols’ God Save The Queen.

Motorhead covers album due out in September