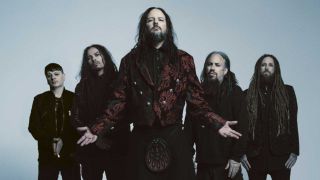 Korn have released an acoustic version of their track Can You Hear Me?.

The rewording of the song, which originally appeared on the band’s 2019 album The Nothing, was recorded in lockdown.

The track debuted on SiriusXM, with Korn frontman Jonathan Davis telling the network: “We just got together and did this by sending files to each other because we’re all stuck in our houses, and we came up with this acoustic version of the song. It’s really stripped down and I love it.

“If it’s a good song, it usually translates well to any form you put it in. It’s a really cool and different version of it.”

He adds: “It was around 2014 on the road when I actually dreamt the melody and woke up and put it in my computer – and I didn’t touch it for another couple of months. It’s a special song  to me.”

Like most bands, Korn have been forced to shelve their touring plans due to the coronavirus pandemic, but they’ve now announced the dates for their rescheduled European tour.

The run of seven shows will now take place in 2021, with purchased tickets honoured for the new dates. The band have been forced to move their scheduled show in Lodz, Poland, to Warsaw. Those who purchased tickets for the concert can swap their tickets to the new venue.