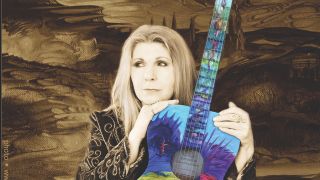 Renaissance singer Annie Haslam duets with Dutch prog rocker Joost Maglev on his latest album Alter Ego. You can hear the entire song, Ever After, below.

"It's a moving and tragic song about a man who lost his wife, this was inspired by Joost losing a girlfriend earlier in life.," Haslam tells Prog. "It remains one of my favourite songs I have ever sang on. I hope you can take a listen, it's a masterpiece.

"It always brings a tear because of the sentiment in the song. So full of passion and excellent guitar work."

Maglev released Alter Ego, his first new album for seven years and a follow up to Overwrite The Sin, through Bad Elephant Music in March of this year. The album is available from Maglev's website.

Renaissance celebrate their 50th anniversary this year and will be touring in the States. The band are currently running a crowd funder through IndieGoGo to raise money to help with a high definition 50th anniversary concert film release.

You can find details here.