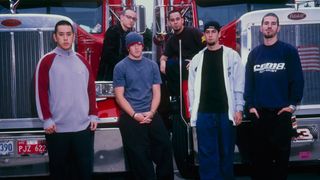 Linkin Park frontman Chester Bennington has revealed record label Warners tried to have Mike Shinoda fired from the band as they were recording their debut album Hybrid Theory.

On the relationship that developed between himself and fellow vocalist Shinoda, and the recording sessions at North Hollywood’s NRG Recording, Bennington tells Metal Hammer: “This was a time where no-one really knew what was fucking going on.

“I mean the label tried to get rid of Mike, which is probably the funniest thing in the world. Looking back I was just thinking ‘Wow, this is insane, this is a wild ride.’”

Bennington adds that the band were confident in their vision for the album, but that the label were only convinced when they heard the final product.

He says: “We believed in what we were doing so much, and we were like, ‘Fuck, why can’t anybody else see this?’

“But when the album came out, I guess they saw it.”

Issue 286 of Metal Hammer magazine also features Iron Maiden, Korn, Black Peaks and a look ahead to Bloodstock 2016, as well as a host of other features, reviews and interviews.

Linkin Park are currently working on their seventh album, the follow-up to 2014’s The Hunting Party.

Blogs Of War: Why It’s Time For Linkin Park To Come Back To Metal

Someone has created a Linkin Park/Bring Me The Horizon mashup