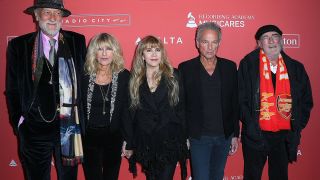 Lindsey Buckingham has settled his lawsuit with Fleetwood Mac.

Buckingham was reportedly fired earlier this year due to a scheduling conflict centred around a world tour, with the band replacing him for the live shows with Heartbreakers guitarist Mike Campbell and Crowded House leader Neil Finn.

The vocalist and guitarist was sacked just days after appearing with them at a Grammy MusicCares event in New York, with Buckingham subsequently filing legal papers against the band claiming he lost up to $14 million.

Buckingham was a guest on This Morning on CBS on Saturday, where he was asked if the situation had now been legally resolved, to which Buckingham replied: “Yes it is.”

Then, asked if he was happy with the outcome, Buckingham responded: “I’m happy enough with it. I’m not out there trying to twist the knife at all. I’m trying to look at this with some level of compassion and some level of wisdom.”

Buckingham said he discovered he was out of the band during a phone call with manager Irving Azoff, who told him that Stevie Nicks hadn’t been happy with him at the MusicCares event – and had accused Buckingham of smirking behind her back during her acceptance speech.

Buckingham said: “It appeared to me that she was looking for something to hang on me in order to instigate some kind of a coup.

“Irving Azoff told me a couple of days later that she’d given the band an ultimatum and either I had to go or she was going to go.”

Buckingham reports that he hadn’t spoken with any of his former Fleetwood Mac bandmates since January, but recently received an email from Christine McVie.

Buckingham said: “She wrote me an email and basically said, ‘Dearest Lindsey, just know that I had nothing to do with any of this. Know that I miss you so much.’

“She said, ‘I believe deep in Stevie’s heart that she would like you to come home.”

In October, Buckingham released his Solo Anthology and has just wrapped up a tour across North America.