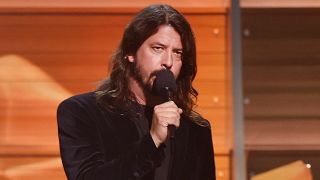 The tribute to late Motorhead icon Lemmy at last week’s Grammys ceremony only took place because Dave Grohl pushed for it, says the producer behind the event.

Alice Cooper’s Hollywood Vampires performed a version of Ace Of Spades to a surprised audience of pop and rap fans during the gala event in Los Angeles.

But Ken Ehrlich – who was struggling to include an unusually large number of artists’ deaths in the weeks beforehand – hadn’t planned anything special.

Ehlrich tells Billboard: “I will confess I didn’t have a lot of Motorhead on my iPad. The metalheads have Dave Grohl to thank for that, because when I asked Dave if he would introduce that segment, he said, ‘I’ll do it – if you do something for Lemmy.’”

Grohl said on stage: “Many of us play rock’n’roll but a rare few among us are rock’n’roll. Lemmy was rock’n’roll. He was a rebel, an outsider, one of a kind, and a way of life. He was Motorhead. He was a legend and I was proud to call him my friend.”

Relatives of some late musicians, including Motorhead drummer Philthy ‘Animal’ Taylor and Toto bassist Mike Porcaro, felt snubbed when the in memoriam segment was broadcast.

But Ehlrich explains he extended the piece for as long as he could, adding: “It became a challenge to do the proper thing and, at the same time, not let the show turn into a series of tributes.”