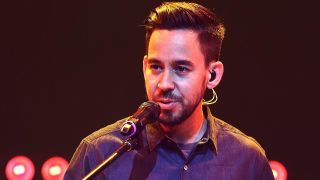 Mike Shinoda admits Linkin Park’s Guilty All The Same video game could have been better – but he’s still glad they made it.

And he’s continuing work on what he hopes will be Windows’ answer to Apple’s GarageBand music app.

Guilty All The Same – one of several LP games over the years – was released earlier this year alongside the track of the same name from sixth album The Hunting Party.

Shinoda tells the Metro: “Our experiment didn’t go as well as we’d hoped. We probably needed another year to program something awesome.

“But the fact fans could remix our music and mess around with our stuff was really cool.”

It hasn’t put him off further experimenting. “There will be more cool projects like that in the future,” he says. “I’m curious about Windows. I grew up around Apple products but there’s a huge amount of people using Windows and taking advantage of low-cost programming. We’ve been working with a company called OpenLab to make a version of GarageBand for PC, called StageLight.”

Shinoda also enjoys experimenting with his 3D printer. “Joe Hahn and I have them at home, but I’ve only been playing around with little figures and the occasional piece of jewellery for my wife. When German firm Staramba came to us and said we could scan fans, print them and have them ‘hanging with the band,’ I thought it was an awesome idea.”