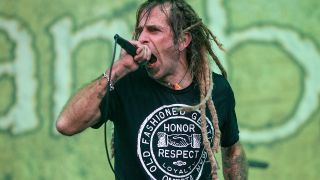 Lamb Of God’s Randy Blythe has given an exclusive interview with the brand new edition of Metal Hammer magazine.

The band are the cover stars of the June issue, which is on sale now and it sees the vocalist dive into several topics throughout the eight-page interview, including their upcoming studio album, politics, new drummer Art Cruz and Blythe's punk background.

Blythe says: “The metal community right now as it exists owes the punk rock world a great debt – all the fun stuff, all the touring routes, everything goes back to the DIY efforts of Black Flag and all those bands in the early days.

“I resisted saying we were a metal band for years, because when we came up, we were more grind influenced, with ties to the punk scene. We were playing warehouses and squats, particularly in West Philadelphia, with a bunch of punk rock bands. That’s the world I come from.”

Blythe also says it drives him up the wall when he hears some fans saying politics has no place in music.

He says: “When people are like, ‘Don’t discuss politics, stick to playing guitar,’ it’s like, ‘You fucking idiot – do you know nothing about the history of music?’

“Not just punk and metal, but music in general. Read some Black Sabbath lyrics, you fucking morons!”

Lamb Of God will release their self-titled new album on June 19, with the band previously sharing the tracks Checkmate, Memento Mori and New Colossal Hate from the follow-up to 2015’s VII: Sturm Und Drang.

You can get the brand new issue of Metal Hammer safely delivered direct to your door and don’t forget: You can also grab a digital pay monthly subscription to Metal Hammer for just £2.38 per month.