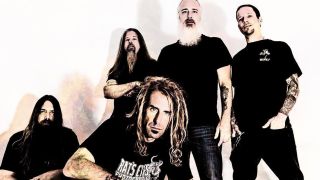 Lamb Of God guitarist Mark Morton has responded to Randy Blythe’s recent comments that the band would go on hiatus after their current touring schedule wraps up.

They’re on the road in support of 2015’s VII: Sturm Und Drang – and although they’ll take a well deserved rest once the shows come to an end later this month, Morton reports that doesn’t mean they won’t be making more music.

He tells radio station 107.7 The Bone (via Blabbermouth): A lot of times, a hiatus is a subjective thing. Because very often when we go out of the public eye in terms of what we’re doing as a band, it doesn’t mean we’re not working.

“It takes us a fair amount of time to write and record these albums, so a lot of times we’ll go off the radar and we’re still working our little butts off to put music together.

“We’ve been a band for a long time and we’re a collective group of very creative people. I personally never stop making music, so I think Lamb Of God might go out of the public eye for a little bit, but it doesn’t mean I’m not doing stuff.”

Morton continues: “I guess that’s the most diplomatic way I can address it. But we’re certainly not done – and we’ve got a lot of cool stuff coming up, both individually and collectively.”

Lamb Of God are on the road with Slayer and Behemoth across North America and have eight shows remaining.

The 10 best Lamb Of God songs, as chosen by Sworn Amongst