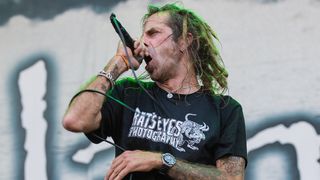 Last year, he joined the protests against the $3.7 billion oil pipeline project in North Dakota, saying that the events at Standing Rock were “a timely reminder that we are killing our planet, and it is the only one we have.”

And he says that experience has strengthened his resolve to write a book which will focus on the global problem of water pollution.

Blythe tells Rolling Stone: “In the next year, I’m going to be working on a new book once this tour cycle is over – and it is going to involve a lot of travel.

“I don’t know how much politics will be involved with it because it’s probably going to be more ecologically centred – not strictly political. It’s going to involve a lot of surfing, I know that.

“It’s kind of tied together to me because the ocean is basically the source of life for us on the planet, and if we screw it all up, then everything is going to die. I think there is a lot of shortsightedness about that.”

Blythe adds: “Before I went to Standing Rock, my concerns for water quality, that’s evident to me constantly as someone who surfs.

“I’ve seen varying water quality in different places around the world. It’s something that’s really concerning to me. So there will definitely be an ecological aspect to the book, but sometimes that also involves politics, too.”

Blythe and Lamb Of God will tour across North America this summer with Slayer and Behemoth – and Blythe reveals the thought of sharing a stage with Slayer again brings backs strong memories.

He says: “The first time we played with Slayer was the first time we went to the UK. We played two gigs with them at the London Astoria and they did all of Reign in Blood.

“I remember standing there on the stage playing – and this is our first time out of the country as a band other than Canada, which doesn’t really count, because you can drive there.

“I’m onstage in London with one of my favourite metal bands and Kerry King had a shot for me – all these people were there, and I was like, ‘Holy cow, I’m in England and I’m direct support for Slayer – this actually could turn into a way I make my living.’”

The North American tour dates get underway at the Bemidji Sanford Center on July 12. Find a full list of tour dates below.