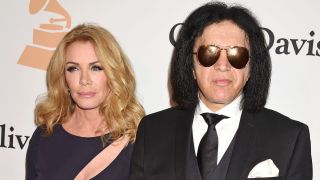 Kiss star Gene Simmons’ wife has attacked Paul Stanley after he apologised for the bassist’s comments about Prince.

Simmons this week stated that Prince’s death last month was self-inflicted and “pathetic” – although the details surrounding his passing have not been confirmed.

That led Stanley to criticise his bandmate’s “cold, clueless” quotes, hours before Simmons himself issued an explanation, admitting: “I got such shit from my family for my big mouth again.”

But his wife Shannon Tweed last night told Stanley via Twitter: “You can’t apologise for someone else. It’s not up to you. He feels the way he feels. He would never do that to you – never.”

She added: “We all have our failings but true friends don’t point at them and throw you under the bus. Especially partners of 40 years!”

Stanley replied: “‘Partners of 40 years’ says it all. Don’t confuse walking under the bus with being thrown under. My apology was right.”

Simmons has not commented. Tweed posted a picture of the couple on her Facebook page, commenting: “Because, no matter others’ opinions, I love my huzby!”

The band’s concert movie Kiss Rocks Vegas is to be screened in cinemans across the world on May 25. They launch a US tour in July.