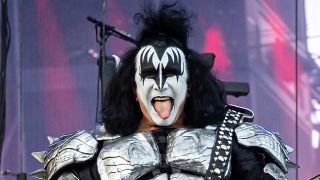 Gene Simmons has blasted back at critics of the high ticket prices on Kiss’ recent End Of The Road US tour.

"Unless you're willing to live in your mother's basement and have a job and do music as a hobby, which is wonderful, being in a touring band is big business," Simmons told the Financial Times. "You'll see a show out there that is as good, or better, than anything else. If you've got one guy with an acoustic guitar, you can charge less. We've got 60 people on the crew and 20 trucks and who knows how many buses, and a jet."

According to Billboard magazine, the tour grossed more than $1 million per show, with the exception of five shows. The band’s show at New York’s Madison Square Garden reportedly grossed $1.947 million alone.

Kiss were named the eighth highest-grossing act of 2019 so far by Pollstar magazine, earning $58.1 million. Other bands in the Top 10 include Metallica ($69.7 million), symphonic metallers Trans-Siberian Orchestra ($57.3 million), while classic rock linchpins Fleetwood Mac and Bob Seger have raked in $67.7 million and $52.8 million respectively.