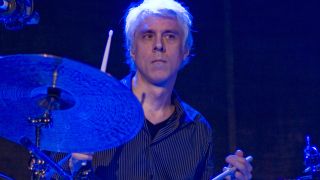 The sheer breadth and range of artists mourning Bill Rieflin’s passing provide proof, were it needed, that as a player, Bill was impossible to pigeonhole. Exactly how he would have wanted it.

Nirvana’s Krist Novoselic, Red Hot Chilli Peppers’ Flea, Robyn Hitchcock, members of King Crimson, R.E.M, and many others all came online last night and today to pay tribute to Bill’s qualities as a musician and a person.

Bill was just as proud of his work with Toyah Willcox’s alt-pop project, The Humans, in which he played bass, as he was of as his contributions to industrial bands such as Ministry, Revolting Cocks, Pigface, Nine Inch Nails, KMFDM and Swans.

Speaking to the Line Of Best Fit website in 2014, Swans’ Michael Gira outlined why Bill was more than just as a gun-for-hire but as someone capable of getting deep into the music and what might be needed: “Bill he doesn’t just play drums – he plays everything basically. He is a tremendously versatile musician but he’s also a good friend so I bring him into the studio once things are in a basic state, and we just sit down and listen to the tracks. I’ll have a suggestion or he’ll think of something and he just brings his personality into it, no matter what instrument he plays, and raises things up to a different level.” That near-forensic focus was something he brought to every project he was involved in.

I got to know Bill after meeting him in Seattle in 1998 and warmed immediately to his dry wit and sharp intellect. Bill’s softly-spoken voice draped itself languorously around the words he used and any observations he offered were rooted in an exacting precision that he also applied to the act of making music which was something that bordered on the sacred for him.

That period saw him as an active member of the Seattle Guitar Circle whose 1999, album, Twilight, features his elegant compositions. His solo album, Birth Of A Giant on the First World Music label he co-founded explored his interest in alt-rock and saw him step up as a vocalist. Though not released until 1999 the sessions for that album originally recorded in 1996 also spawned another very different collection. Entitled The Repercussions Of Angelic Behaviour, it featured a sequence of furious, energetic improvisations featuring Bill drumming alongside Trey Gunn and Robert Fripp. Not quite an official KC offshoot or ‘projeKct’ as the Double Trio’s research and development period was known, it provided ample evidence of Bill’s surging power as a drummer and his razor-sharp responses to a rapidly-changing environment.

Around this time I would stop anyone who would listen and declare that Bill Rieflin was the best drummer King Crimson never had. Happily, after a long stint where Bill played stadiums around the world with REM, and as much to Bill’s surprise as anyone else’s, that description was rendered redundant when Robert Fripp reconvened King Crimson in 2013 with Bill joining Pat Mastelotto, Gavin Harrison, Mel Collins, Tony Levin, Jakko Jakszyk as the seven-headed beast, as Fripp called them.

In that setting, between drums and keyboards, Bill brought his own distinctive presence to King Crimson’s repertoire when the group toured the USA in 2014.  Being on the road for any length of time is to exist in a bubble and people's faults and foibles come under microscopic scrutiny. Nobody is without faults and like the rest of us, Bill had his fair share of them. His habit of making inscrutable pronouncements could irritate some fellow band members as much as it might inspire others, and his legendary custom of changing hotel rooms, more than once within an hour of check-in, was also a source of much gentle ribbing at his expense.

A pre-show visit to a restaurant would inevitably result in Bill interrogating the waiter about the provenance of a particular dish at some length. Sometimes, his brutal honesty to the customary ‘Was everything alright?’ was deeply uncomfortable for his fellow diners as he launched a very gentle but detailed critique of where the restaurant had gone wrong. As King Crimson’s manager, David Singleton has observed, Bill relished being the grit in the oyster.

Bill’s unfailingly dapper presence belied a cancer diagnosis that pre-dated his membership of King Crimson. Keeping it private he fought the disease with a distinct absence of self-pity. As his condition worsened, requiring invasive surgery as well as a punishing regime of chemotherapy, his ability to continue in the band was diminished, resulted in him taking a sabbatical in 2015 and then ultimately to stand down. The reason behind his absence was never publically revealed. "I’ve never made my personal life a part of my public life. If there’s anything interesting about me, it’s what I do with music,” he told Rolling Stone in 2017.

At the same time as dealing with his illness, a bad situation was made even worse after his wife, the artist Francesca Sundsten, whose striking works graced King Crimson’s album covers and tour posters from 2014 onwards, also received a terminal cancer diagnosis. Like Bill aged in her late 50s, Frankie's death in 2019, was something that hit hard yet remarkably was a burden Bill bore with equanimity. That they both died so young and with so much still ahead of them is such a tragedy and makes their passing deeply upsetting and difficult to comes to terms with.

The hard thing for those left behind after somebody dies is the cold immutable fact that you’ll never hear their laughter or share their jokes or discuss that burning issue that exercised and excited you both. For those who knew Bill as a friend, they’ll have personal memories to draw on for remembrance. For me, it’s sharing an open-top hire car roving the Los Angeles freeway in search of a root beer at a bar he knew; drinking tea in the bucolic setting of the Seattle countryside; receiving numerous ‘phone calls at unexpected hours of the day (and night) which more often than not began with an expletive-laden insult. And I'll miss his dark, self-deprecating humour. We were discussing, improbably enough, the announcement of the Prog Magazine Readers' Poll in January 2019, quipping, "I want to win in the category of ‘just what the fuck does he actually do?' If that award is already taken, I’ll gladly accept ‘most useless cunt.' But of course, what's left alongside the memories is the music, in all its glorious diversity, that Bill had a hand in making happen. People like Bill Rieflin don’t come around that often. We should cherish them when they do.