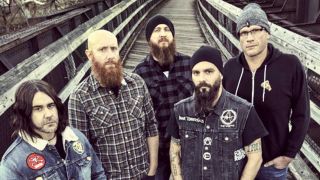 Killswitch Engage are inviting fans to join them on a trip through their 20-year career.

The band completely wiped their Instagram feed recently and then posted one image per day which captured a year in the band’s life.

Now they’ve taken things up a notch by creating a comprehensive timeline of  highlights from their career from 1999 through to 2019. The interactive post features facts and figures, along with artwork and photographs.

Adam Dutkiewicz says: “I'll never forget when we first started touring and I had to quit my day job to give it a go. I remember thinking, ‘Just try it for a year, that way you'll have no regrets when it doesn't work out, and you can go find a new job.'

“Twenty-plus years later, here we are, and it's been an amazing ride. I'm so grateful to our fans for letting us continue to do this. Thank you, Killswitch Engage fans everywhere!”

Fellow guitarist Joel Stroetzel adds: “It's hard to believe Killswitch Engage has been going for so long – we're gettin' old! We hope you all enjoy the photos, as they have definitely brought back a lot of memories for us.

“It seems like only yesterday we were playing VFW Halls in Western Massachusetts and rehearsing in my parents' basement.”

Bassist Mike D'Antonio says it’s been “mind-blowing” looking back over their career and adds: “How a little band from Massachusetts could tour the world for this long is beyond me.

“A lifetime of exciting moments and amazing memories... I would not trade it for the world.”

Killswitch Engage have also launched a retro merch range, featuring t-shirts and hoodies from the Alive Or Just Breathing and As Daylight Dies albums.

Last month, the band released an acoustic version of their 2016 track We Carry On from quarantine, while frontman Jesse Leach recently launched the debut album by his hardcore punk side project The Weapon on Bandcamp.

A portion of the profits will go to help clubs in New York that have been affected by the COVID-19 pandemic.