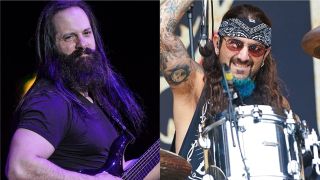 John Petrucci has spoken about how he and his former Dream Theater bandmate Mike Portnoy reunited for the guitarist’s new solo album Terminal Velocity.

News of the partnership came to light last week, when guitarist Petrucci revealed on social media that Portnoy is playing drums on the album, while Flying Colors’ Dave LaRue is on bass duties.

Speaking to the Official Dream Theater Fan Club, Petrucci said: “Mike is playing drums which is really awesome. Obviously, Dave LaRue played on my first solo album Suspended Animation, who I also toured with many times with G3 – as in the past Mike Portnoy. We toured together with G3 as well. But, yeah, having Mike play drums on this is cool. It was a great experience.”

As for how the pair came back together for the project, Petrucci explains: “We’d been talking and he had planted the seed in my ear. I was telling him about my plans, and he said, 'Well, if you need somebody, I'm available.' I'm, like, 'I'm going to take you up on that.’

“I had written all the songs and we programmed the drums – I played bass, and our engineer Jimmy T played bass, so we had these final completed songs. Mike came in, learned everything and added his touches and taste and did a tremendous, spectacular job.

“It was a lot of fun to reunite musically and do that together. It took about six days to do. The drums sound awesome.

“Dave recorded his stuff remotely, redid all the bass. And it's mixed by Judas Priest’s Andy Sneap. It's my first time working with Andy, and he did a tremendous job mixing it.”

Terminal Velocity is expected to be released later this year on a date still to be confirmed.

The nine-track record will include Happy Song, which Petrucci debuted on a South American G3 tour in 2012 under the working title Cloud Ten, while Glassy-Eyed Zombies – which also made its debut eight years ago – will also feature.