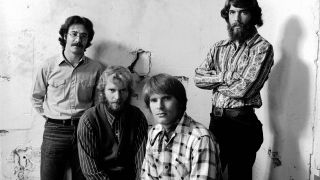 John Fogerty has discussed his attempts to reconcile with his brother Tom in the 1980s.

The pair fell out when Creedence Clearwater Revival imploded in 1972, and their relationship remained cold until soon before Tom’s death in 1990.

But frontman John says he wanted to settle his differences with the guitarist – if only for the sake of their mother.

Fogerty writes in an excerpt from his memoir Fortunate Son: My Life, My Music: “I’d think about Tommy and Jimmy Dorsey, how they had a feud for years, but they reunited and their mother was so happy.

“I wanted to do that with Tom for our mother. So I started a dialogue. I think I wrote him a letter. We talked on the phone at least once.”

He suggested that each of them wrote down the issues they had against the other, then they could work through them one by one. His own contained eight points, and started with the fact that his brother had sued him over song ownership in 1978. But Tom denied it had happened.

Fogerty says: “On the morning of the trial, he walked up to my attorney and said, ‘I’m not suing John any more.’

“That was in 1983. But I’d already had to deal with the lawsuit since 1978. Many thousands of dollars later Tom decided to drop the lawsuit. In his mind that meant he didn’t sue me.

“So I sent him the cover page of the filing, which said, ‘Tom Fogerty vs John Fogerty.’ I don’t think we got any further than that. Unfortunately, our mom passed away.”

John saw his brother a handful of times shortly before his death from AIDS-related tuberculosis. He says: “I was sad that life had been taken from Tom. That sadness was mixed with other emotions. But I’ve forgiven Tom. I’m not angry any more.

“I love my brother. I sure loved the old family days, the way we were as kids. It’s resolved, and somehow Tom knows it’s alright, wherever he is.”

Fortunate Son: My Life, My Music is on sale now in the US, and it’s published on October 29 in the UK.