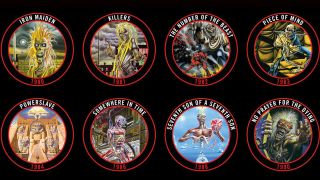 A selection of the Iron Maiden bottle caps which can now be found on bottles of Trooper (Image credit: Robinsons Brewery)

Iron Maiden and Robinsons Brewery have revealed that throughout October, all bottles of Trooper beer will feature a range of collectable bottle caps.

The designs on the tops of the bottles include the album covers of all of Maiden’s studio albums, from their self-titled 1980 debut through too 2015’s The Book Of Souls.

The brewery report that some of the caps are harder to find than others, with the collection launched to coincide with the latest leg of their Legacy of The Beast tour.

Trooper brand manager Sam Kennerley says: “Iron Maiden and Trooper fans are some of the most dedicated and passionate in the world, so we wanted to create something completely new and different for them.

“Iron Maiden is so iconic and distinctive and creating the bottle caps is just one of the ways we wanted to celebrate the band and its amazing artwork.”

Those looking to collect the full set can also get their hands on a display frame direct from Robinsons.

Robinsons and Iron Maiden have also released a Halloween-inspired Day Of The Dead bottle design of Trooper, which is available until the end of November.

Iron Maiden’s next show will take place in Rio on Friday (October 4), while the band were recently confirmed as headliners of next summer’s Download UK along with Kiss and System Of A Down.