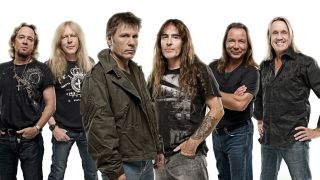 Guests would be able to stay in the eight-bedroom property where the band recorded 1992 album Fear Of The Dark and several other studio sessions – and they might even meet the bassist himself on occasion.

The nine-acre premises has been on the market for five years, with a starting price of £6.75m, although it dropped twice and can now be bought for £3.95m.

With parts constructed in the 15th century, and a building recorded in the location since the Norman Conquest of 1066, Sheering Hall includes a private Horse And Cart bar, full-size football pitch with changing rooms, tennis court and even a classic British telephone box.

Harris has never been certain he wanted to sell it, even though he moved to the Bahamas in 2003 – and now he’s discussed going in another direction.

He tells Bandit Rock: “I was moving abroad, and I thought, ‘Well, I don’t know if I’m going to really want to stay abroad.’ So I put it at a silly price, and I thought, ‘If someone wants to pay silly money, they’re welcome to it.’ Then I brought the price down – it’s actually very reasonable now.”

He continued: “In an ideal world I’d like to turn it into a boutique hotel. I think Maiden fans would go there. I had a small bar in Portugal, called Eddie’s Bar, which is no longer open.

“But people used to come from all over the world just to go to that little bar. I think maybe they would go to the house. We recorded some albums there and there’s lots of memorabilia and everything like that.

“It means I could stay there as well, which would be great. It would be nice.”

Iron Maiden last month completed touring duties in support of 2015 album The Book Of Souls – but guitarist Dave Murray recently said they had no plans to slow down, and that fans should expect “some surprises” next year.