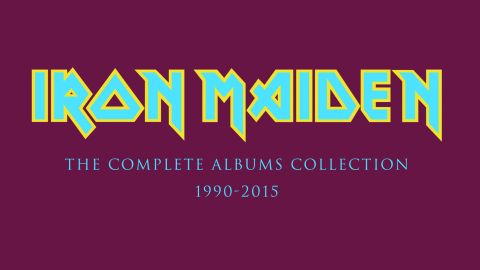 Disclaimer: this could get expensive. Iron Maiden fans are an inherently loyal and devoted bunch, and so while this second (almost) comprehensive chapter in the vinyl rebirth of the band’s vast catalogue may do terrible things to your wallet, it’s somewhat hard to imagine anyone ultimately complaining about the end result: the entire Maiden story recast on 180g black vinyl and in meticulously recreated packaging, looking and sounding the absolute bollocks.

The swanky Complete Album Collection 1990-2015 presentation box comes with both No Prayer For The Dying and Fear Of The Dark included, with The X-Factor and Virtual XI released simultaneously but separately and the rest of the albums – including no fewer than four Maiden live efforts alongside the studio works – being unveiled individually in two further batches spread across the summer. The absence of live albums A Real Live One, A Real Dead One and Live At Donington aside, this is very much the post-80s Maiden motherlode. As a result, it is also a golden opportunity to reassess some of the band’s less acclaimed records, with vinyl’s undeniable sonic benefits thrown in as an added bonus.

In truth, No Prayer For The Dying’s self-conscious, back-to-basics approach was a let-down after the grandiose perfection of Seventh Son Of A Seventh Son and it remains the patchiest set of songs in Maiden history. Fates Warning, in particular, is utterly, infuriatingly forgettable but Tailgunner, The Assassin and the title track are all unsung gems. 1992’s Fear Of The Dark is much better, greatly aided by its monumental title track, the epic Afraid To Shoot Strangers and the oft-ignored brilliance of Judas Be My Guide. Then, of course, come the two Blaze Bayley albums: The X-Factor and Virtual XI. If nothing else, it’s heartwarming to see the Blaze era acknowledged and both albums have their dark charms. The X-Factor starts and ends brilliantly, bookended by glowering epics Sign Of The Cross and The Unbeliever and bolstered by dark anthems like Lord Of The Flies and the punchy Man On The Edge, but slumps horribly in the middle amid far too much mid-paced plodding. Although much-maligned, Virtual XI has its moments too: The Clansman, Futureal and Como Estais Amigos are all magnificent and more than make up for The Angel And The Gambler being at least four minutes too long.

From 2000 onwards, however, Maiden were unstoppable. All still as fresh as steel-plated daisies, Brave New World, Dance Of Death, A Matter Of Life And Death and The Final Frontier garnered ecstatic reviews upon release, and revisiting them now reinforces the sheer confidence and quality of post-millennial Maiden: their progressive flair, their sizzling collective chemistry and their remorseless passion for delivering the goods. Chuck in four live albums of variable import but equal excellence and that vinyl copy of The Book Of Souls that you already own (and which should, we are told, fit in the box too), place the whole thing next to the previous box set and what you have is the greatest single catalogue of heavy metal that has ever existed. Worth every fucking penny, surely?