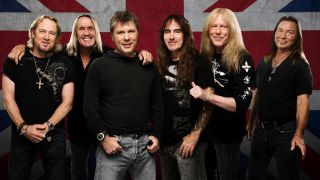 Iron Maiden have teamed up once again with Robinsons Brewery to create a new version of their hugely popular Trooper beer.

Not content with resting on their laurels, they’ve decided to crank up the flavour with the Trooper Nitro – a new version of the brew, which has been charged with nitrogen and CO2 to create a “deep and complex flavour.”

Trooper brand manager Sam Kennerley says: “Our keg version of Trooper has been extremely popular but after listening to feedback from our customers and numerous on-trade trials, which had outstanding results, we decided to switch to mixed gas.

“The result – an awesome longer lasting keg-conditioned Trooper ale whose deep and complex flavour has been enhanced with a cooler temperature and a perfect serve.”

“We hope that Trooper Nitro can build on the success that Trooper has had since its launch in 2013 and attract a new wave of stockists and customers who are eager to get their hands on this flavoursome pint.”

Kennerley also reports that Trooper Nitro “is the first of many exciting projects with Bruce Dickinson and Iron Maiden that are in the pipeline for Trooper in 2019. Stay tuned.”

Watch a Tooper Nitro trailer below and find out more about the ale on the Robinsons Brewery website.