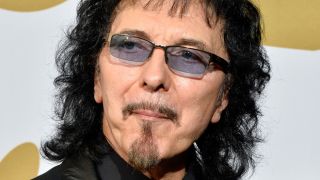 Black Sabbath guitarist Tony Iommi says although there’s a chance his cancer could return, he won’t let it rule his life.

The metal icon was diagnosed with Non-Hodgkins lymphoma three years ago and he’s undergone treatment to keep the disease under control. But he now says he’s been told there’s a high chance it could return and he’ll have to wait for more scans to see if the cancer has been held in check.

He tells The Mirror: “I finally finished my antibody treatment over the summer. It’s good in a way because I have more energy now, but I still don’t know whether the treatment worked. Because I had two different operations at the same time, one on my prostate and one on my lymph nodes, I had too many scans last year and too much radiation. So I can’t have any more scans yet.

“Every day I feel around for lumps and bumps. Every time I get a pain in my stomach I think, ‘Oh God, it’s cancer.’ It’s horrible. I even dream about it. But that’s my life now.

“The surgeon told me he doesn’t expect the cancer to go away. There’s a 30% chance that it could, but more than likely it will come back and it could be any time.”

He continues: “I look at life differently now. I could be here another 10 years or just one year – I don’t know. Sometimes I wonder if I should try to live a more peaceful life. Then I think, ‘I don’t want to let the illness take over.’ After all, I enjoy where I’m at now.”

Iommi was diagnosed shortly after Sabbath started working on 2013 album 13 and he says frontman Ozzy Osbourne helped him through the studio sessions – although the singer’s lack of tact occasionally struck a nerve.

He continues: “Ozzy came in and said, ‘Oh yeah, didn’t so and so die from that?’ Which is exactly not what you want to hear. I thought, ‘Thanks a lot, Mr Bloody Cheerful.’ But that’s Ozzy all over, he always puts his foot in it.

“It was a relief to be working on the album because it gave me something to focus on instead of sitting there waiting to die. Some days I could join in, other days I felt too ill.

“Ozzy was actually really helpful. It was good to have someone around who had experienced it all before because you always fear the worst when you talk about cancer. He went through a lot of that stuff when Sharon had colon cancer. When I felt tired he would say, ‘This is what happened with Sharon, you ought to go and lie down, have a rest.’”

He adds: “He even offered to make the tea, but he’s still Ozzy. He’d disappear for three hours then come back empty handed. You’d ask him, ‘Where’s the tea?’ And he’d say, ‘Oh yeah, I forgot.’”

Black Sabbath are expected to release their final album this year which will be accompanied by a tour. It’s still not confirmed if original drummer Bill Ward will be behind the kit, with Ozzy stating recently any reunion will be down to wife and manager Sharon.