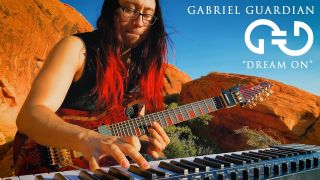 YouTuber Gabriel Guardian has released a video of his cover version of the Aerosmith classic Dream On. So far, so meh. But what makes Gabriel's take unique is that he tackles both guitar and keyboard parts at the same time, the clever sod.

"I've always loved this song, especially the vocal melody and solos!" says the multi-tasking muso. "Hope you like my interpretation of this Aerosmith classic filmed live in one-take at Red Rock Canyon in Las Vegas."

Guardian has one of those ambidextrous brains. The Texas multi-instrumentalist made something of a noise back in 2016 when he filmed himself covering Iron Maiden’s 1983 classic The Trooper on guitar and a synth.

The following year he tackled The Beatles’ 1966 classic Eleanor Rigby. Originally a heart-breaking treatise on loneliness and the treatment of the elderly, in Guardian’s ambidextrous hands it became something more bombastic, a festival of fleet-fingered soloing filmed in front of a cathedral.